You are here: Home / Archives for ethnography

Comedians have gotten a lot of mileage out of the plodding pace of bureaucracy. 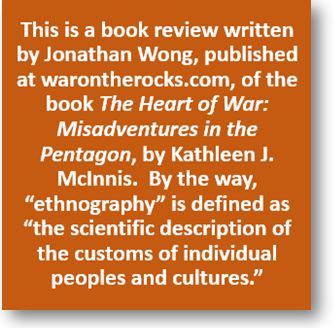 It’s such a common criticism that even Disney is in on the joke: “Zootopia” had its choice of any animal, but chose to portray bureaucrats as painfully slow-moving sloths.

This sluggishness comes from two factors: the need to build consensus among multiple stakeholders and a constraint-driven structure. From my time at Headquarters Marine Corps, I still remember the yellow routing sheet with its dozens of departmental signature blocks, each representing someone who needed to sign off on my policy paper before it could be presented to a decision-maker. I would affix my paper to the routing sheet and send it to the next office for approval — then gently remind them days later to act on it. The process is often slow, ideas are sometimes starved to death, and the results are rarely satisfying.

Keep reading this article at: https://warontherocks.com/2019/01/bureaucrats-in-the-defense-department-an-ethnography/