You are here: Home / Archives for FEMA

It’s not often you hear someone say, “I have a passion for deploying on emergency management debris missions.” 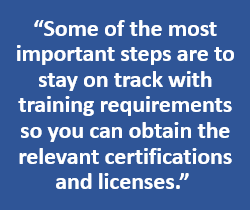 In addition to working as a senior project engineer and civil engineer for the Corps of Engineers, Engineering and Support Center, Huntsville, Braun has been a quality assurance representative, team leader, supervisor and subject matter expert, providing QA oversight and technical assistance to the Federal Emergency Management Agency for projects to remove and dispose of debris after a natural disaster.

“My main role on these missions is to ensure that the debris removal and disposal is being performed in accordance with FEMA guidelines,” said Braun, who has twice been honored for his efforts. “This entails extensive coordination with contractors, local government officials, monitoring firms, homeowners and FEMA representatives. It’s rewarding work: the team is executing the mission so that the affected people and communities can start to rebuild and move forward with recovery.”

Read more about Chad Braun’s satisfaction with being a part of the Army acquisition workforce here: http://www.theredstonerocket.com/military_scene/article_e666201e-e88a-11e6-bca4-9be3e7467d6a.html

Doing business with the Homeland Security Department could mean getting the cameras rolling.

DHS will be accepting video proposals besides written ones as part of a procurement innovation initiative, said Russell Deyo, undersecretary for management at DHS, in a recent speech.

For example, a May 25 request for information concerning a contract vehicle for agile software development called for vendors to submit video presentations.

“We’re working hard to be innovative,” Deyo said, speaking at the Homeland Security 2016 Conference of the Armed Forces Communications and Electronics Association (AFCEA) in Washington, D.C.

Keep reading this article at: http://www.federaltimes.com/story/government/acquisition/2016/06/21/dhs-accept-video-proposals/86174890/

Federal government oversight of The Gallup Organization, put in place as the consulting and polling company looked to settle allegations that it conducted business unethically, has ended early after a government official said he views Gallup as a responsible company.

Gallup entered a three-year agreement on April 19, 2013 with the Department of Homeland Security ahead of a July 2013 settlement of a whistleblower lawsuit.

On Oct. 9, 2014, less than halfway through the three-year term, the government granted Clifton’s request for an early termination of the agreement, according to a letter recently released to The World-Herald by the Federal Emergency Management Agency following a public records request. The request was made in August 2014.

“I believe that the measures you have implemented has set Gallup on a course that will make it a model company, and that the Government can view Gallup as a responsible company regarding contracts and contracts under federal grants,” wrote Michael D. Russell, senior counselor to the Homeland Security Department’s Under Secretary for Management, in the letter to Clifton.

Keep reading this article at: http://www.kearneyhub.com/news/regional/government-ends-oversight-of-gallup/article_6b71e7e6-8d35-11e5-b1e6-8b1e7b00cda9.html

Hundreds of millions of dollars were lost due to a misinterpretation of a Federal Emergency Management Agency rule that funds the replacement or repair of facilities after a natural disaster, according to a recent Homeland Security Department inspector general report.

FEMA’s public assistance program provides financial assistance for people in the aftermath of hurricanes, earthquakes, tornadoes, floods and terrorists attack. The agency spends around $10 billion every year for the Disaster Relief Fund to help people rebuild after a natural disaster.

But applying FEMA’s 50 percent repair or replace rule correctly can be very difficult and susceptible to error, misinterpretation and manipulation, the report dated Aug. 7 said.

Keep reading this article at: http://www.fiercehomelandsecurity.com/story/ig-femas-50-percent-rule-costing-govt-hundreds-millions-dollars-overpayment/2014-08-21