You are here: Home / Archives for iBook

The U.S. General Services Administration (GSA) has released the first ever iBook version of the Federal Acquisition Regulation (FAR).

And while a tome about the complex rules governing the federal government’s purchasing process may not sound like a bestseller, the FAR is essential reading not just for federal contracting officers and federal contractors, but also for owners of businesses interested in doing business with the government.

“Basically, anyone who does or wants to conduct business with the government reads the FAR,” said Dan Briest, Program Manager of Acquisition.gov in GSA’s Office of Acquisition Policy. “We’ve had multiple requests for a downloadable version of the FAR because contracting exists regardless of whether there’s a strong wi-fi signal where you are.“

Not being able to access an online version of the FAR on a laptop because wi-fi is not available has always been a problem for acquisition professionals and contractors working in the field. This is especially true for members of the Contingency Contracting Corps, a government-wide group of federal contract specialists who travel to disaster areas around the world, leading agencies in emergency response and rescue missions.  With the free FAR iBook on a phone or tablet, these specially -ained, volunteer first-responders now can have the FAR at their fingertips. 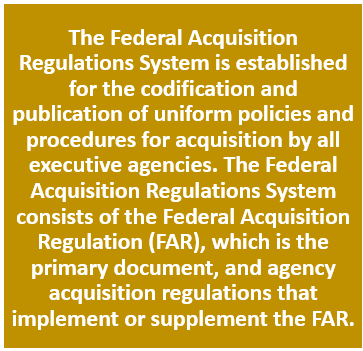 “We realized that not everyone works in a traditional wired office these days, but they still need instant access to the FAR. This includes people working in the field who are without internet,” recounted Briest. “The Contingency Contracting Corps and other teams responding to assist in disaster relief need the FAR, but mobile signals are going to be down. The Department of Agriculture often has employees traveling to areas without internet, but they still need to be able to look up regulations.  These are the people who have been asking for a downloadable version of the FAR.“

The FAR iBook has the same functionality that’s incorporated into every iBook, which means readers can perform searches, write notes, and highlight or save the sections they use most often.

Rule changes occur as often as once a month, so a hard copy of the FAR is always out of date as soon as it is printed.  iBook owners will receive a notification each time there’s an update, with the new editions downloading — free — the next time they connect to wi-fi.   And the iBook is always available to download again from the cloud, should the user upgrade a tablet or phone, or delete the FAR iBook in error.

The FAR iBook is just the first release planned by GSA.  Dan Briest says they plan to issue the Federal Management Regulation (FMR) and the Federal Travel Regulation (FTR) as free iBooks, too.  And you can expect to see the FAR available in the Kindle and Google Play stores soon.