You are here: Home / Archives for legacy technology

Much of the oxygen in the federal contracting community has gone to the Pentagon’s Joint Enterprise Defense Infrastructure contract in recent months, but the Pentagon is very close to bidding out a second major cloud contract that may rival it in size.

Defense officials said last month that the Defense Enterprise Office Solution acquisition, valued at approximately $8 billion, could be bid out later this month, with an expected award issued by the second quarter of 2019. The contract will have a five-year base period with five one-year options.

DEOS is the Pentagon’s attempt to “unify and modernize” some of its legacy systems, including enterprise email, collaboration services, voice and video services, messaging, content management and other productivity capabilities for more than 3.5 million users.

Keep reading this article at: https://www.nextgov.com/it-modernization/2018/06/pentagons-second-multibillion-cloud-contract-be-bid-coming-months/148733/

Modernizing the federal government’s aging legacy systems is a top priority of the Office of Management and Budget, Congress, and just about every agency. 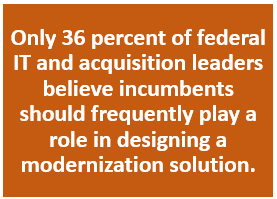 However, identifying, prioritizing and successfully executing modernization projects remains a consistent challenge across the government.

Public Spend Forum and Censeo Consulting Group launched a joint study to explore the root causes hindering modernization efforts across federal agencies. In our first look at the initial findings, we focused on the impact of structural risk aversion on managerial decisions around IT modernization projects. In this article, we focus on another interesting finding from the survey: the role of incumbent vendors in determining the modernization solution.
Keep reading this article at: http://www.federaltimes.com/articles/incumbent-vendors-and-it-modernization-help-or-hindrance