You are here: Home / Archives for lowesr price technically acceptable

A major federal acquisition opportunity with a potential contract value of $50 billion for information technology vendors is back on track. 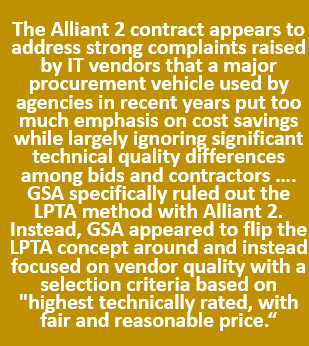 The General Services Administration (GSA) recently resumed processing vendor applications after a legal challenge to the contract was resolved in its favor.

As a result, the GSA this fall will reveal the names of approximately 60 vendors who will be eligible to participate in the Alliant 2 IT contract vehicle. The program is notable not only for the money involved, but also for a major contracting change designed to facilitate business opportunities for IT vendors.

Under the contract, vendors will be able to provide a broad range of IT capabilities to multiple federal agencies.

The scope of work is designed to provide agencies with maximum flexibility in acquiring an IT services-based solution, according to GSA, encompassing existing technologies as well as leading-edge capabilities and virtually any future developments in IT. Components will include email, cloud, cybersecurity, networks, Internet of Things, and big data.

Keep reading this article at: http://www.ecommercetimes.com/story/Federal-IT-Acquisition-Worth-50B-Cleared-for-Takeoff-84320.html

The Department of Defense (DoD) Under Secretary of Defense for Acquisition, Technology and Logistics (AT&L) Frank Kendall distributed a memorandum to his department’s acquisition professionals on March 4, 2015, providing guidance on when to use lowest-price technically-acceptable (LPTA) contracts.

Notably, the guidance also speaks about how to apply LPTA competitions to acquisitions for professional services.

Kendall’s memo says that DoD should not use LPTA if it is willing to pay more for superior performance.

The memorandum is comprehensive in that it speaks to the types of contracts that DoD may use in LPTA procurements, including fixed-price, time and materials, and cost-plus fixed-fee contracts.

“LPTA is the appropriate source selection process to apply,” Kendall states, “only when there are well-defined requirements, the risk of unsuccessful performance is minimal, price is a significant factor in the selection, and there is neither value, need, nor willingness to pay for higher performance.”  Kendall continues: “LPTA has a clear, but limited place in the source selection ‘best value’ continuum.”

Confusion over “lowest price, technically acceptable” contracts have rendered the Pentagon’s acquisition workforce “brutalized” by critics and the press who mistake shrinking defense budgets for a lack of ambition for innovation, a top acquisition official said Thursday.

Katrina McFarland, assistant Defense secretary for acquisition and past president of the Defense Acquisition University, said “Low-cost, technically acceptable is good when appropriate, but shouldn’t be used to achieve innovation.” Her “very junior-level” acquisition workforce has a learning curve when it comes to taking the next step toward value added in contracts, McFarland told several hundred industry and government executives at a conference titled “Agility, Velocity and Service Excellence” sponsored by the General Services Administration, the Homeland Security Department and the American Council for Technology-Industry Advisory Council.

Seeking industry input on how to prioritize Defense spending on weapons and information technology, McFarland gave a capsule history of how the acquisition workforce in the 1990s was cut by 20 percent to “reap the peace dividend,” and how, following the 9/11 terrorist attacks, the civilian force was then flush with money and focused more on “pushing product out the door to the warfighter. We weren’t focused on honing business skills or maintaining a good customer-provider relationship,” she said.  “We were a bad customer.”

An injection of money by Congress in 2008 allowed planners beginning in 2010 to assemble 53 experts from agencies and industry and boil down 325 proposed initiatives to 23, which eventually resulted in the Pentagon’s pair of Better Buying Power initiatives. These include rewards and incentives for the workforce, McFarland noted, including the first-ever visits to contractor sites by deputy and undersecretaries to explain “from the horse’s mouth” the distinctions between low-cost contracts, value-added innovations and affordability in the context of the long-term costs of ownership of a system. “Instead of beating the workforce about the ears, it is a guide to help you think,” she said. If the workforce doesn’t understand low-cost technically acceptable, it will fumble around a bit,” she added, telling the business representatives, “if [acquisition] people ask questions and say this is not logical, do not stop them,” for this is how risks are taken that succeed.

Lowest price technically acceptable procurements have been gaining favor  among agencies, but that gives vendors less incentive to be innovative if the  approach costs more, an Oct. 24 Market Connections and Centurion Research study says.

Under LPTA, agencies focus more on price than on past performance as long as  the vendor meets minimal job requirements. So if a vendor comes to an agency  with a unique solution that costs more than a competitor who comes with a more  basic solution, the agency is more likely to choose the cheaper solution as long  as it meets the minimum requirements.

The practice has been utilized by the Defense Department through its Better  Buying Initiative, the study says, but has proliferated through other agencies  as well.

The study showed that of the $27 billion in procurements it analyzed, the  Veterans Affairs Department was the biggest user of LPTA outside of the DoD.

Keep reading this article at: http://www.fiercegovernment.com/story/lpta-contracts-gaining-favor-among-agencies-give-vendors-less-incentive-inn/2013-10-28

Improving the acquisition of weapons systems and platforms through cost-conscious strategies and more effective prototyping is a key part of the Defense Department’s ongoing Strategic Choices Review, Pentagon leaders told an audience May 23 at the Center for Strategic and International Studies (CSIS), Washington, D.C.

“Secretary Hagel asked me, working with Chairman Dempsey, to conduct a strategic choices and management review, to examine the choices that underlie our defense strategy, posture and investments, including all past assumptions and systems,” Deputy Defense Secretary Ashton Carter told the audience. “Everything’s on the table: roles and missions, war planning, business practices, force structure, personnel and compensation, acquisition and modernization investment, how we operate, how we measure and maintain readiness.”

Keep reading this article at: http://www.dodbuzz.com/2013/05/24/pentagon-acquisition-reform-key-to-strategic-choices-review/