You are here: Home / Archives for LRSB

The U.S. Air Force is looking into how classified data about a competition for a next-generation U.S. bomber found its way into a report published by Forbes magazine, according to several sources familiar with the issue.

Boeing Co and Lockheed Martin Corp this month filed a formal protest against the Air Force’s contract with Northrop Grumman Corp to develop the new long-range strike bomber, a deal worth up to $80 billion.

Loren Thompson, chief operating officer of the Lexington Institute think tank, published a detailed column on the Forbes website the day the protest was filed, saying the estimate that it would cost $21.4 billion to develop the plane was roughly twice what the competing industry teams had bid.

The level of detail included in the column raised concerns given the classified nature of the bomber program, according to three of the sources. 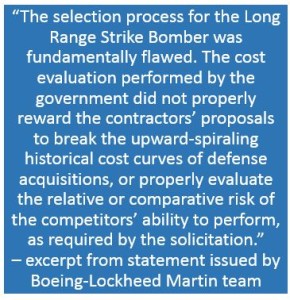 The U.S. Air Force blamed mistaken cost estimates for the new bomber program — one of the most closely watched defense acquisition efforts underway — in part on “human error.”

As Bloomberg News reporter Tony Capaccio noted in a question to officials during a “State of the Air Force” briefing at the Pentagon, the service this year estimated the so-called Long Range Strike Bomber, or LRSB, would cost $58 billion over a decade, up from a previous estimate of just $33 billion — though the correct figure is closer to $42 billion.

“There has been no change in the costing factors over the last two years,” she said. “It was a mistake. It was a regrettable mistake. It occurred in part because of human error and in part because of process error, meaning a couple of our people got the figures wrong and the process of coordination was not fully carried out in this case. Coordination, of course, means other people are providing a check and balance and looking at the numbers, so that’s typically how something like this would get caught.”

Keep reading this article at: http://www.dodbuzz.com/2015/08/27/air-force-blames-mistaken-bomber-costs-on-human-error/