You are here: Home / Archives for NAICS codes

NAICS codes are the basis for SBA’s size standards; therefore, the code that the contracting officer assigns determines whether a firm is eligible for federal contracting preferences, such as small business set-asides. 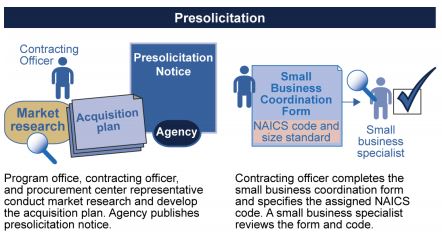 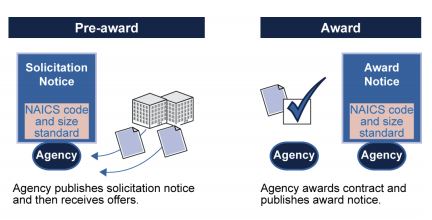 The Government Accountability Office (GAO) recently studied this activity and learned that contracting officers (COs) cite several factors that affect their assignment of NAICS codes, including information on the work to be performed and input from agency small business specialists. However, the COs also told GAO that assigning a NAICS code can be challenging when one or more codes could apply to a contract.

In the 2013 rule, SBA clarified that under certain circumstances, COs may assign more than one code to multiple-award contracts. Such contracts are awarded to two or more contractors under a single solicitation and include indefinite delivery/indefinite quantity (ID/IQ) contracts used when quantities and timing are not known at the time of the award. However, updates to the Federal Acquisition Regulation (FAR) — the rules governing the federal government’s purchasing process — are required to fully implement SBA’s final rule.  The agencies GAO interviewed plan to implement this rule after it is adopted into the FAR and they can make necessary updates to their information technology for contracting. This FAR rule-making process is ongoing.

In a report released by the GAO on Jan. 4, 2018, the GAO reports that some industry groups and firms have expressed concerns about how COs assign NAICS codes even though SBA’s Office of Hearings and Appeals (OHA) dismissed most appeals and denied more than half of the remaining appeals. Some industry groups and firms GAO interviewed expressed concerns that COs may assign NAICS codes based on the size standard (thereby affecting the number of firms that can compete as a small business) and not the work to be performed. However, some also stated it was difficult to determine how often this practice occurs, and OHA officials noted it is the office’s role to review the appropriateness of appealed NAICS codes, not the contracting officer’s intention when assigning the code. Of the 62 NAICS code appeals that were filed in calendar years 2014 through 2016, OHA dismissed 35, denied 15, and granted 12.  Appeals were dismissed because, among other things, they were untimely or the contracting officer cancelled the acquisition.