You are here: Home / Archives for National Security Strategy

The U.S. Navy, which is graduating 40,000 trained recruits every year, “is the most talented Navy we have on record,” Chief of Naval Operations Adm. John Richardson says. 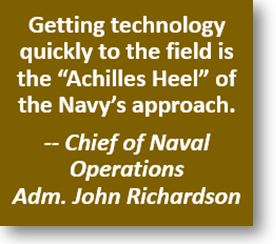 The service has met its recruiting goals for sailors every month for the past 12 years, he told an audience at the Brookings Institution in Washington on Jan. 28th, “even though we can’t compete” with the private sector on salary. And the Navy “demands a lot,” Richardson added, citing requirements that recruits spend seven months at sea away from their families.

The incoming maritime aspirants also are drawn from a diverse talent pool because diversity is an “asymmetric advantage,” he said. “Diverse teams have been shown scientifically to be better” at collaboration, creativity and innovation. Recruiters will also tailor their pitches to candidates with differing goals in education, travel and family obligations.

Such moves to care for the “U.S. Navy team” are one of the components of the Navy’s newly revised “Design for Maintaining Maritime Superiority,” released last month after Navy leaders updated a January 2016 version to reflect the President’s National Security Strategy and the Pentagon’s National Defense Strategy.

Keep reading this article at: https://www.defenseone.com/politics/2019/01/recruiting-faster-tech-acquisition-are-vital-maritime-superiority-cno/154485