You are here: Home / Archives for negotiated price

Businesses and consumers make complex trade-off decisions every day when buying and selling supplies and services. 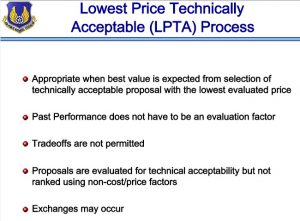 Sometimes it makes sense to pay more or charge more for a supply or service when quality improvements, added features, or other considerations justify the price.  Other times, paying more or adding features provides no meaningful benefit so we opt for the least expensive item that satisfies our needs.

The federal government uses this same framework, dubbed the “best value continuum,” in negotiated acquisitions.  On one end of this continuum is a full trade-off, where non-price factors, e.g., quality and past performance, take precedence over price.  On the opposite end of the continuum is the lowest price technically acceptable (LPTA) process.  Under LPTA, the government determines its minimum acceptable technical requirements and then seeks to award a contract to the lowest priced offeror who meets the minimum requirements.

Federal agencies have been criticized for overusing the LPTA source selection process, based on the concerns that LPTA procedures chill innovation and hamstring agencies who could benefit from trading cost or price considerations for technically superior capabilities. The business community also criticized government reliance on LPTA to purchase safety-related items; such items should not be purchased based on minimum standards.

In response to these criticisms, Congress included Section 880 in the Fiscal Year (FY) 19 National Defense Authorization Act (NDAA), stating: “[i]t shall be the policy of the United States Government to avoid using lowest price technically acceptable source selection criteria in circumstances that would deny the government the benefits of cost and technical tradeoffs in the source selection process.”

Keep reading this article at: https://www.mondaq.com/unitedstates/government-contracts-procurement-ppp/1034008/you-get-what-you-pay-for-new-final-rule-limits-use-of-lpta

Bots have been making some headway in the government workforce, performing the kinds of mundane, clerical, routine tasks that make the people who do them feel less than human.

But robotic systems may soon take it up a notch, gaining new responsibilities with basic but essential procurement duties.

The Defense Advanced Research Projects Agency (DARPA) recently issued a request for information looking for robotics and intelligent process automation applications in the commercial sector. The robots would need to perform tasks such as evaluating proposals, automating market research, performing cost and price analyses, carrying out modification actions, and issuing price negotiation memoranda. The Pentagon’s top research arm isn’t proposing that robots run the show or take people’s jobs, but it is talking about the kind of jobs that might move robots up a theoretical pay grade from what they’ve been doing.

DARPA said it wants to look into the possibility of using the “operational efficiency and functional capabilities” of such systems to perform “routine administrative tasks and document generation in the government procurement process.”

Keep reading this article at: https://www.governmentciomedia.com/bots-could-be-climbing-another-rung-workforce-ladder

The Office of the Inspector General (OIG) of the Department of Veterans Affairs (VA) has found significant weaknesses in the planning, evaluation, and award of a series of acquisitions, determining the contracts were not developed or awarded in accordance with acquisition regulations and VA policy intended to ensure services acquired are based on need and at fair and reasonable prices.

In September 2013, the VA awarded the PC3 contracts for an estimated $9.4 billion, with a potential cost to VA of $27 billion.  The OIG found that contracting officials solicited proposals from vendors without clearly articulating VA’s requirements.  Thus, the vendors bidding on the solicitation did not have sufficient information on the type of specialty health care services they would need to provide, where to provide them, and their frequency. Thus, according to the OIG “the VA increased the risk of not achieving the objectives of PC3 by inadequately identifying its health care service requirements.”

Documentation supporting vital contract award decisions was either not in VA’s Electronic Contract Management System or incomplete. Of the documents available, the OIG noted that the awarded costs were actually negotiated at a higher rate than originally proposed by one of the vendors. Among the OIG’s other findings:

The Veterans Access, Choice, and Accountability Act of 2014 (Choice) was enacted on August 7, 2014. According to VA’s Under Secretary for Health in a memo dated July 7, 2016, since implementing the Hierarchy of Care memorandum in May 2015, the use of Choice has increased tremendously, while PC3 use has dwindled.  The OIG recommended the VA’s Principal Executive Director for Acquisition, Logistics, and Construction improve oversight and accountability, and ensure sufficient planning on all high dollar value and complex acquisitions.  The Principal Executive Director concurred with the OIG’s recommendations and an acceptable corrective action plan was provided , the OIG reports.