You are here: Home / Archives for negotiation

The Defense Advanced Research Projects Agency is looking for a few good bots to help with procurement. 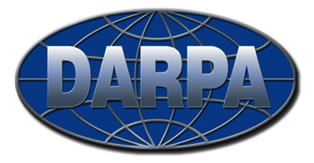 In a request for information posted Jan. 23, DARPA said it wants information on off-the-shelf options for robotic and intelligent process automation tools that can increase efficiency and expand its ability to manage routine administrative tasks such as proposal evaluation, market research, cost and price analysis and documentation related to price negotiations.

DARPA is also considering integrating robotic process automation into Defense Department IT systems, including the System for Award Management, Contractor Performance Assessment Reporting System and the Standard Performance System/Procurement Desktop-Defense. Respondents are asked to provide available information on the software’s security and any interoperability limitations it might have with existing government systems.

The U.S. Court of Federal Claims has found that an Air Force contracting officer’s decision to use the lowest price technically acceptable (LPTA) acquisition strategy in a negotiated procurement was within the “especially great discretion” afforded to contracting officers.

Phoenix Management, Inc. contested an Air Force solicitation’s format, arguing that the LPTA approach did not represent the best value to the Government.  According to Phoenix Management, the Air Force “failed to document specifically why” it believes that an LPTA methodology would result in the best value.  The company contended that if the Air Force proceeded with the LPTA strategy, coupled with the solicitations’ past performance evaluation procedure, “there is simply no way … that [the Air Force’s] ultimate selection would result in a ‘best value.’” In addition, the plaintiff contended that the Air Force’s planned integrated assessment “necessarily involve[s] trade off evaluations” which “are expressly prohibited.”

In its defense, the Air Force argued that its decision to select the LPTA format was within the broad discretion afforded to agency contracting officers. The Air Force also took issue with the  plaintiff’s argument that the solicitation’s integrated assessments require tradeoffs.

The implications of this case mean that when a contracting officer (CO) determines that there is a reasonable expectation that best value will be obtained from the selection of a technically acceptable proposal, the CO may employ the LPTA methodology.  Under the Federal Acquisition Regulation, “[a]n agency can obtain best value in negotiated acquisitions by using any one or a combination of source selection approaches” (FAR Subpart 15.101).  Thus, COs have the authority to select the approach that will provide the best overall value to the Government, understanding that the relative importance of cost of price may vary.

In arguing its case, the Air Force determined that its requirements “have been stable for many years” and “are not expected to vary significantly from the current level.”  The CO also found that the Air Force’s requirements “are well defined and performance will be closely monitored.”  The Air Force noted that the solicitations further mitigate the risk with a two month orientation period.  During this period, the awardee will “shadow the current work-force on a non-interference basis to observe the operations ….”   The Air Force concluded that the “overall [performance] risk assessment is low.”

Phoenix Management disagreed with the CO’s conclusion and asserted the LPTA approach will not always represent the best value. In support of this argument, the company presented a hypothetical situation in which two offerors are technically acceptable with a nominal price differential but markedly different past performance.  The company argued that an award to the offeror with a slightly better price over the offeror with significantly better past performance does not represent best value.  Phoenix contended that once an agency selects the LPTA methodology, “[a] proposal is per se the best value if it meets the selection criteria and proposes the lowest price.”  The Court, however, found that the company’s hypothetical had no bearing on whether the CO articulated a rational basis for the decision to utilize the LPTA methodology.

In making such a decision, the Court reviewed the agency’s stated rationale, considering “whether the contracting agency provided a coherent and reasonable explanation of its exercise of discretion ….”   This standard does not require that a CO’s approach will always result in the best value. The Court limited its review to the process behind the agency’s decision, not potential outcomes. The Court took note of the fact that the CO articulated a rational basis for the decision to use LPTA, namely that the overall performance risk for the solicitations was low and that emphasizing the price factor through the LPTA format would secure the best value to the Government.

Bottom line, the Court found that the CO’s decision to employ the LPTA format was within the “especially great discretion” afforded to COs making decisions in negotiated procurements.

Like the class deviation, the Proposed Rule would declare “unenforceable” 15 typical CSA/EULA terms and conditions that GSA believes are inconsistent with federal law. This change would thus allow GSA to ignore these clauses during negotiations, with the stated goal of reducing time and expense in negotiating CSAs/EULAs.

But the Proposed Rule does not stop there.

Keep reading this article at: https://www.insidegovernmentcontracts.com/2016/06/gsa-proposed-rule-doubles-down-on-csaeula-deviation

Are you a good negotiator?

The University of Missouri is hosting the workshops to help businesses understand how government agencies negotiate their contracts.

By participating, business people will discover their own negotiating style and whether it works in the government contracting arena.  Participants will be challenged to ‘think outside the box’ and put good negotiation techniques into practice. 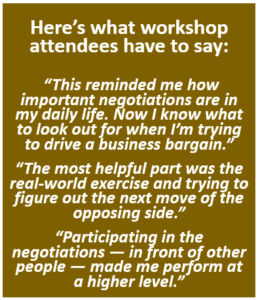 In addition to expert instruction, each attendee will receive a printed guide.

The workshops are being presented through special arrangements made by the Missouri Procurement Technical Assistance Centers (MOPTAC).  Specialists from The Contracting Education Academy at Georgia Tech, a recognized educational leader in the government contracting field, will lead the workshops and provide insights available nowhere else.  As a result of attending, participants will understand how to negotiate with government agencies, prime contractors, suppliers and even potential business partners.