Researchers at cybersecurity firm Tenable have discovered a number of previously unknown vulnerabilities in the access control systems of an ID card manufacturer and service provider used by federal agencies, including the Executive Office of the President.

Tenable researchers announced Monday they had found several weaknesses in the control system used by IDenticard, called PremiSys, which if exploited could allow an unauthorized person to gain access to secure buildings and disable locks, as well as exfiltrate user data or otherwise modify accounts using administrator privileges.

According to a blog posted Monday, the PremiSys system uses hardcoded usernames and passwords for administrator credentials that cannot be changed by the customers. The system also uses default usernames and passwords for database access, which the users can only change by sending preferred passwords to IDenticard, an additional step that some might not take, opting instead to leave the default credentials in place.

Keep reading this article at: https://www.nextgov.com/cybersecurity/2019/01/researchers-flaws-vendor-security-software-could-leave-some-federal-buildings-vulnerable/154231/

Half of government and military employees were using easily crackable passwords as of 2012, according to a report released Wednesday. 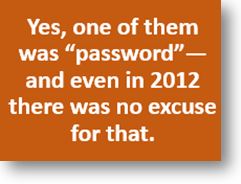 That’s only slightly better than the 52 percent of the general public that was using passwords that were far too weak at the time, according to the report from the cybersecurity firm WatchGuard.

The report authors analyzed a data dump of about 117 million encoded passwords that were pilfered from the career networking site LinkedIn in 2012 and posted online in 2016. Among those 117 million passwords, WatchGuard found about 350,000 passwords linked with a .gov or .mil email address.

In some cases, the LinkedIn hackers had already decoded those passwords and published them in plain text. In other cases, the passwords were stilled “hashed,” which means they were converted into a long string of characters using a system that is non-random but still supposed to make it very difficult to convert the string back into a plain text password.

Keep reading this article at: https://www.nextgov.com/cybersecurity/2018/09/half-government-and-military-employees-used-awful-passwords-linkedin-report-finds/151178/