You are here: Home / Archives for pricing

A General Services Administration’s top acquisition official has promised an improved Schedule 70 following an audit that found price discrepancies for identical products and some offered at higher prices than they were commercially available. 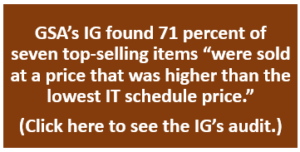 Mary Davie, the assistant commissioner of the Office of Integrated Technology Services, responded to the inspector general audit in a recent blog post, acknowledging the legitimacy of the report while explaining the years-long progress made to improve the Multiple Awards Schedules program.

“We agree with [the IG’s] concerns, which is why we have been working for the past three years to fundamentally transform the MAS program, reduce prices and streamline processes,” Davie said.

The Defense Contract Management Agency (DCMA) reports that contract files contain insufficient documentation “across the board.”

DCMA regularly conducts reviews of each unit of the Department of Defense (DoD) that performs contracting functions.  According to Claire M. Grady, who is DoD’s Director of Procurement  and Acquisition Policy, “these reviews assess the effectiveness of the contracting function, analyze and assist in any problem areas, and identify noteworthy practices that may be beneficial to all organizations.”

On December 31, 2015, Grady’s office issued the results of the DCMA’s “procurement management reviews” for FY15.  The report, in newsletter form, reveals that DCMA continues “to observe insufficient documentation across the board” in official contract files.  The most common documentation flaws are:

In addition to documentation deficiencies, DCMA notes that proposed prices were accepted without attempts to negotiate, thus representing “lost opportunities to save money or obtain better business deals.”  The agency also found that annual reviews of COR files were not being conducted.

In a more positive vein, DCMA observed what it called “impressive” dedication by DoD’s contracting workforce and a “commitment to mission success.”   They made note of leaders’ efforts to keep morale up and provide for training opportunities and well as electronic resources.

DCMA’s report also devotes attention to the unique challenge e-mails represent in documenting contract files.  Because of the dominance of electronic communication, DCMA concedes that “the question of what should go into the official file is getting harder and harder to answer.”  The agency recommends that “contracting personnel … do some critical thinking prior to putting e-mail correspondence into the file.”  It recommends that the following questions be asked:

DCMA recommends that documentation should address both decisions and the rationale for each decisions.  The full report can be accessed at: DCMA Procurement Management Review – FY15

Only 40 percent of orders placed against GSA Schedules in FY14 were based on three or more quotes — the number required by the Federal Acquisition Regulation (FAR).

This finding comes as a part of a recently-released Government Accountability Office (GAO) report.

According to the General Services Administration (GSA), total sales through the Federal Supply Schedules (FSS) program in fiscal year 2014 were $33.1 billion. This includes purchases by federal, state, and local agencies, including federal intelligence agencies which do not report their FSS spending publicly. GAO’s analysis of publicly reported federal procurement data shows that federal use of the FSS program has declined from $31.8 billion in 2010 to $25.7 billion in 2014 — a 19 percent inflation-adjusted decrease. This is consistent with the decline in overall federal contracting obligations. The FSS portion of total federal contracting obligations remained steady — between 5 and 6 percent.

The extent of competition on GSA Schedule orders is influenced by various factors. One factor identified in the orders from the agencies GAO reviewed — the Departments of Defense (DOD) and Health and Human Services (HHS) and GSA — involves situations where few vendors can fulfill agencies’ specific needs.

HHS had a significantly higher percentage of FSS obligations in fiscal year 2014 on orders that were competed but the agency received only one or two quotes — 51 percent — compared to DOD and GSA, which received one or two quotes for 35 and 32 percent of their FSS obligations, respectively. HHS’s practice of targeting solicitations to fewer vendors may be contributing to this higher rate.

The bottom line?  Agencies are paying insufficient attention to prices when using FSS, according to GAO.  Ordering agencies did not consistently seek discounts from Schedule prices, even when required by the FAR. In addition, GAO found cases in which officials did not assess prices for certain items, as required, or had insufficient information to assess prices. Contracting officials were not always aware of the requirement to seek discounts and told GAO that the need to assess prices was not emphasized in training and guidance. When contracting officials are not aware of these regulations, agencies may be missing opportunities for cost savings.

Why GAO Did the Study

In its report, the GAO examined competition and pricing for FSS orders. The report addresses: 1) how and to what extent the government is using the FSS program, 2) factors influencing the degree of competition for FSS orders, and 3) the extent to which agencies examine prices to be paid for FSS orders.

GAO analyzed data from the Federal Procurement Data System-Next Generation on obligations through the FSS program for fiscal years 2010-2014 and reviewed a non-generalizable sample of 60 FSS orders awarded in fiscal year 2013 by DOD, HHS and GSA, the agencies with the highest use of the FSS program. GAO also interviewed officials from these agencies and FSS vendors.

GAO recommends that DOD, HHS and GSA issue guidance and assess training to focus attention on rules related to pricing. DOD, HHS and GSA concurred. GAO also recommends HHS assess reasons contributing to its higher rate of orders with only one or two quotes. HHS concurred.  The complete GAO report, publicly released on August 10, 2015, may be seen at: FSS – More Attention Needed to Competition and Prices.

The Federal Supply Schedules, or FSS, program allows agencies to buy commercial products and services from a list of approved vendors at discounted prices.

According to the General Services Administration, agencies placed more than $33 billion worth of orders through the FSS program in fiscal year 2014. The FSS portion of total federal contract spending represents about 6 percent of contract spending governmentwide, the report says.

That said, agencies should be pushing for discounts even further than those provided by the base FSS prices, GAO says.

Keep reading this article at: http://www.fiercegovernment.com/story/gao-agencies-should-be-seeking-deeper-discounts-fss-contracts/2015-08-13