You are here: Home / Archives for QASP

The Homeland Security Department did such a poor job of monitoring a contractor’s implementation of new performance management software the DHS inspector general found that the “failure literally meets [the Government Accountability Office]’s textbook definition of ‘waste.’” 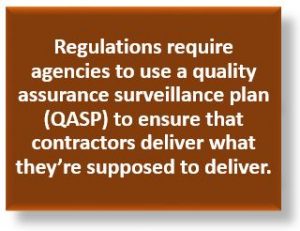 The Performance and Learning Management System, intended to manage employee training and performance and for which the Human Capital Office spent $24.7 million since 2013, still doesn’t meet the department’s needs, Inspector General John Roth wrote in a report released on Wednesday.

Though PALMS was projected to achieve cost savings of more than $52 million over five years, delays in operations resulted in pointless expenses, such as subscription fees totaling $5.7 million for a nonexistent service.

One big problem, according to the IG: “Despite concerns raised by several internal stakeholders, DHS accepted PALMS as operational in January 2015 without verifying that it worked as it was supposed to.”

Keep reading this article at: http://www.govexec.com/contracting/2017/07/how-homeland-security-spent-millions-nonexistent-service/139276/