You are here: Home / Archives for RAND

The Section 809 Panel released its first of three reports in January aimed at improving and streamlining Defense Department acquisition across the government. The initial report was well-received for good reason. Through a careful analysis, it recommended bold and much-needed reform to the regulations underpinning everything DoD buys. 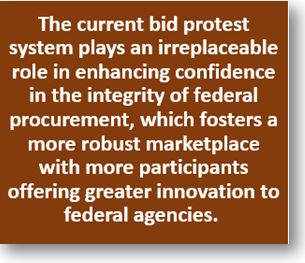 These recommendations ranged from reducing the regulations that encumber contracts for commercial products and services to making DoD’s treatment of contractors’ intellectual property more consistent with the commercial marketplace.

For the uninitiated, the Section 809 Panel, whose members were appointed by DoD and represent experts across the government contracting field, derives its name from the section in the 2016 National Defense Authorization (NDAA) that created the panel. Among the panel’s mandates is to streamline the acquisition process while protecting “the best interests of the Department of Defense.”

Keep reading this article at: https://federalnewsradio.com/commentary/2018/03/when-it-comes-to-bid-protests-section-809-panel-should-follow-data/