You are here: Home / Archives for ROI

The Trump administration should revisit an old, results-based approach to contracting currently prevalent in the private sector — share-in-savings, also known as gain share. 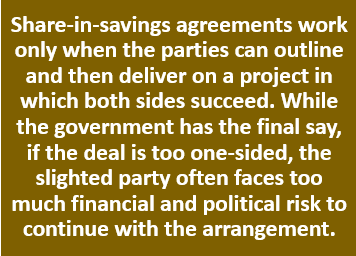 Unlike other types of contracts that commit the government to funding a project upfront, a share-in-savings contract requires the government to make only a minimal, upfront investment to begin a project, paying the contractor only when agreed-upon milestones or expected results are realized.

Share-in-savings contracts begin with specific agreed-upon measures, measurement methods, targets, timing, and rewards earned from successful results. The contractor is paid if it meets or exceeds the agreed-upon targets in the specified time. Further, if savings against the established cost baseline are generated, both the government and the contractor share in the savings. This incentivizes the contractor to save the government money, and helps ensure that the government does not pay for work done poorly or not at all.

Keep reading this article at: http://www.govexec.com/excellence/promising-practices/2017/02/old-contracting-approach-could-be-just-what-new-administration-needs/135517/

The Public Spend Forum, a group focusing on public-sector procurement, analyzed government IT spending  and found that a  “check the box culture” and a broken requirements and procurement process inhibits competition and limits innovation.

Its recent report, Billions in the Balance: Removing Barriers to Competition & Driving Innovation in the Public-Sector IT Market makes several recommendations for IT managers:

Keep reading this article at: http://gcn.com/blogs/pulse/2014/06/competition-in-it-procurement-report.aspx

As the Department of Defense continues to wrestle with the high costs and often slow pace of military technology and acquisition programs, it would do well to take a closer look at that other bastion of high-tech government programs: the National Aeronautics and Space Administration. NASA’s low-cost missions from yesteryear just might hold the secret to bringing the price tags of today’s Pentagon programs down to Earth.

In the 1990’s, NASA’s portfolio of Faster, Better, Cheaper (FBC) missions included some truly impressive accomplishments. Notable examples include the Mars Pathfinder mission, which put a rover on another planet for the first time ever. Pathfinder was developed in half the time and one fifteenth the cost of the earlier Viking mission to Mars and went on to explore Mars three times longer than its projected lifespan.

And then there was the Near Earth Asteroid Rendezvous (NEAR) mission, which came in $78 million under budget and still collected 10 times more data about the asteroid Eros than expected. Despite not being designed as a lander, NEAR went on to land on its target– another first. The touch-down was so smooth and gentle, the spacecraft continued to broadcast from the surface of Eros for two full weeks.

Keep reading this article at: http://breakingdefense.com/2013/05/31/faster-better-cheaper-lessons-defense-could-learn-from-nasa/