You are here: Home / Archives for Salesforce

The General Services Administration’s choice to create a blanket purchase agreement for Salesforce cloud integration and support services on the surface seems logical. 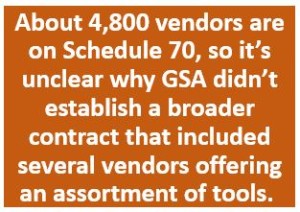 It’s a widely used platform — according to a simple search on USASpending.gov website there have been 227 contracts worth more than $61 million since fiscal 2011— and one that needs more structure and control across government.

“The marketplace for Salesforce implementation and integration services was fragmented and had some disparity in there,” said David Shive, GSA’s chief information officer during a press call on Jan. 20. “When we looked, we saw there were no established quality standards for Salesforce development. We saw there were inexperienced vendors that were winning with new Salesforce customers, but sometimes had some dubious results coming out from those inexperienced vendors. We saw there was inconsistent delivery of code and configuration from agency to agency. There was failed implementations that was negatively impacting adoption of the tools and the processes surrounding those tools. And we saw that some vendors were rebuilding the same apps for the same agency and were developing closed systems in an otherwise open environment.”

Keep reading this article at: http://federalnewsradio.com/reporters-notebook-jason-miller/2016/01/gsa-takes-easy-way-solve-contracting-challenge/