You are here: Home / Archives for space technology

A daylong tour of Georgia Tech on Feb. 24 introduced General John Raymond to some “next-gen thinking” that he might find helpful in his latest assignment.

The recently named chief of Space Operations for the United States Space Force spent the day talking space exploration and space policy with faculty, researchers, and students from the Sam Nunn School of International Affairs; the Center for International Strategy, Technology, and Policy; and the Daniel Guggenheim School of Aerospace Engineering.

He capped off the day with a lecture, “Space as a Warfighting Domain,” delivered before a packed audience in the Kendeda Building for Innovative Sustainable Design.

“There is nothing we do in the Joint Forces that isn’t related to space,” he told listeners before giving a brief history of the military’s space engagement. “Our adversaries have been watching what we do in space, wanting to disrupt us, and our job is to make sure that never happens.”

Raymond ended by encouraging the next generation of innovators in the audience to study hard and work even harder. The Space Force may be in their future. After all, when he was in college, Raymond said, he didn’t touch a computer until his junior or senior year.

“It’s an exciting time to be in this business. I wish I could change places with you. Don’t be bashful. You have a skill set that, when you graduate and are hired, whatever you do, you can help this country.”

Space as a Laboratory: The Daniel Guggenheim School

Raymond’s visit to the Guggenheim School introduced him to research on a broad array of projects – from optimized space mission operations to space situational awareness and alternatives to GPS navigation.

“The AE School has a strong, historical relationship with the military,” said William R.T. Oakes School Chair Mark Costello. “We are thrilled to welcome General Raymond to campus and are excited about digging into the challenges that the Space Force will put before us.”

Much of Costello’s conversation with Raymond revolved around CubeSats – the miniaturized satellites that are now routinely launched into space via traditional two-stage rockets.

By October of 2020, the AE School will have launched seven student-built CubeSats, each with unique scientific and technological missions. One of them, ORCA, will be launched in March to calibrate ground-based orbital and positioning equipment from space. Students in the Space Systems Design Lab (SSDL) designed it in just six weeks, after a launch spot was unexpectedly offered to them last November.

“They spent pretty much every waking moment during winter break working on it,” said Professor Brian Gunter.

“The great thing about our lab is that our undergraduate researchers are primary participants in these launches – designing the vehicles, building the circuit boards, 3D-printing the thrusters. They learn to take an idea from the beginning and follow it through with all of the complexities that unfold.”

Throughout his lab tour, Raymond was noticeably engaged in each presentation, stopping speakers to mine them for additional technical details. Prof. E. Glenn Lightsey, the SSDL director, applauded his keen interest in the field and in the future.

Keeping Pace with the Need for Policy Innovation: The Sam Nunn School

Raymond later visited with students and faculty from the Nunn School for policy-oriented discussions that ran the gamut — from the complexities of creating the unique warfighting culture of a new service branch to what constitutes unacceptable aggression in space.

Raymond said the need is great for not only technical innovation, but also breakthroughs in space policy, an area he said currently resembles the “Wild Wild West.”

He told students that enormous opportunities are waiting for people like them in the space sector, whether it be military, civilian, or government spaceflight programs.

“When you graduate from here, know that you’re good enough to do whatever you want to do,” he said.

Mariel Borowitz, an assistant professor of space policy in the Nunn School, helped organize the visit and said she hopes it will lead to relationships that can help Georgia Tech play a role in the success of the Space Force.

Among other initiatives, the Nunn School and the Guggenheim School are partnering to develop a joint graduate certificate program in international security and aerospace systems. The Nunn School also is a participant in the Center for Space Technology and Research.

“The Space Force is going to need people who understand the strategic implications of operating in a contested space environment, and this is the type of issue that Nunn School faculty and students are well equipped to do,” she said.

We now live in a world of accelerated technological advancement. Moore’s Law has come home to roost in the space business. Taking seven to 10 years to develop and deploy operational space systems is no longer efficient nor acceptable. 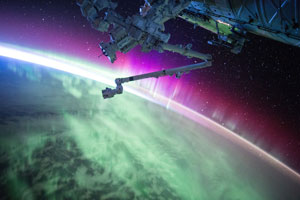 Recently, as pointed out by the U.S. Government Accountability Office, America’s adversaries have been turning technology in three to four years, while the U.S. is turning technology in seven to 10 years. For the last 25 years, we have been the unchallenged world leaders in space technology. However, if this trend continues it will not be very long until we fall behind. This has been recognized by the GAO and congressional and Air Force leadership. To respond, we must figure out how to move fast, insert technology quickly and respond to rapid technology insertion by our adversaries. Therefore, we need to increase our risk tolerance, and build systems faster and more affordably, allowing us to deploy resilient constellations that can endure losses, and still provide mission capability. To retain system agility and resilience, we cannot afford to buy and field technologically “old” systems up to a decade after program initiation.

In the past, we deployed systems very quickly. The first Defense Meteorological Satellite Program satellite was built in 10 months, but we did this with a high tolerance for risk. While we were risk tolerant, Gen. Bernard Schriever and the early military space pioneers realized that problems in high-technology, low-volume developments would occur, and therefore built in cost and schedule margin. This margin allowed rapid and efficient addressing of problems and issues as soon as they occurred.