You are here: Home / Archives for strategic sourcing

Forgive us for a minute while we play a little semantics. What does the term “best-in-class contracts” really mean?

If you are NASA and your SEWP contract is “best-in-class” does that mean the rest of your contracts are, say, “worst-in-class” or “meh-in-class?”

I bring this up now because the new category management memo from the Office of Management and Budget strongly encourages agencies to use “best-in-class” contracts to help meet the initiative’s goals.

Among the things OMB told agencies to do is: “Annually establish plans to reduce unaligned spend and increase the use of BIC solutions for common goods and services, consistent with small business and other statutory socioeconomic responsibilities.”

Keep reading this article at: https://federalnewsnetwork.com/reporters-notebook-jason-miller/2019/03/what-does-best-in-class-really-mean-for-federal-contracts/

Unfortunately, much of the writing about strategic sourcing conflates it with category management, creating some misunderstanding about how the two are related. Detangling the definitions can help; though doing so necessarily simplifies processes that in practice are highly nuanced and often overlapping.

It’s worth the risk, however, in order to clarify what is strategic about strategic sourcing and how category management strategies are successfully executed.

Keep reading this article at: http://www.govexec.com/excellence/promising-practices/2016/11/make-government-great-again-fix-procurement-system/133324

As a budget-pressured Defense Department strives to improve efficiency and cut costs, it is increasingly turning to joint enterprise licensing agreements, known as JELAs.  Similar to the strategic sourcing model, a typical JELA involves several DoD organizations merging their requirements for a specific project or service into a single agreement that is carefully tailored to meet all of their needs. 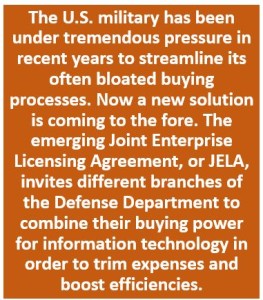 The approach, which has gained momentum over the past three years, is designed to help DoD better leverage its buying power by requiring organizations with basically the same needs to enter into joint licensing agreements with one or several suppliers. A side benefit to JELAs is that they promote increased conformity and standardization across DoD organizations. “The branches have recognized that multiple applications and multiple iterations of the same application are wasteful, and they are looking to this as a way to get a handle on that,” stated Deltek Federal Analyst John Slye in a recent C4ISR & Networks editorial whitepaper, “DoD’s New Acquisition Model: Joint Enterprise Licensing.”

Keep reading this article at: http://www.federaltimes.com/story/military-tech/it/2015/12/30/dod-looks-jelas-streamline-acquisitions/78069680/

As a former GSA employee, it was great to see the White House focus on the important, unsung work GSA does day and day out on behalf of the American people.

Strategically, category management and the CAP have the potential to improve GSA’s delivery of best value commercial products, services and solutions to customer agencies. As you know, FAS has reorganized around market sectors or industry categories to better focus on market trends and customer requirements.

Category management has the potential to improve FAS’s management of its contracting programs through increased understanding of customer mission requirements and commercial market trends. The CAP has the potential to provide the federal enterprise with transparent, competitive information regarding already existing contracting programs, best procurement practices and market trends. The CAP can address contract duplication and provide federal market information that can further assist customer agencies in making sound, best value procurement decisions.

Keep reading this article at: