You are here: Home / Archives for task orders

In a new rule announced May 1, the FAR Council implemented prior statutory changes to GAO’s bid protest jurisdiction.

For task orders issued by the Department of Defense, NASA, or the Coast Guard, the rule provides that GAO will have jurisdiction only over task orders “valued in excess of $25 million.”

For civilian agencies, GAO continues to have jurisdiction over protests of task orders “valued in excess of $10 million.”  The rule also permanently repeals a pre-existing FAR clause that had set a September 30, 2016 expiration date on the ability to protest civilian agency task orders.

The new rule — codified as FAR 16.505(a)(10) — implements Section 835 of the National Defense Authorization Act for Fiscal Year 2017, which directed the FAR Council to establish the new DoD, NASA, and Coast Guard threshold.  (The sunset date for protests of civilian agency task orders had previously been repealed by the GAO Civilian Task and Delivery Order Protest Authority Act of 2016.)  According to the FAR Council, its new rule is designed to “follow[] the statute exactly.”

Keep reading this article at: https://www.insidegovernmentcontracts.com/2018/05/new-far-rule-implements-increased-minimum-dollar-threshold-for-gaos-protest-jurisdiction-over-dod-nasa-and-coast-guard-task-orders/

In 2016, the Government Accountability Office came down on the side of companies challenging federal procurement decisions more often than in any year in almost a decade, according to data the office sent to Congress last Thursday afternoon.

In its role as the government’s independent arbiter over bid protests, GAO sided against federal agencies’ initial awarding of contracts and task orders in nearly 23 percent of the cases it decided. The figure was up sharply from 2015, when GAO’s procurement arbiters sustained just 12 percent of protests. It was also the highest rate of sustained protests since 2007, when the office agreed with protesting vendors in 27 percent of that year’s cases.

The raw number of protests GAO sustained was also up significantly over the past year: It upheld 139 complaints out of a total of 616 cases it decided in 2016, the most sustained cases in any year since 2001, when the office’s annual reports began including tallies of the data. That compares to just 68 sustained cases out of 587 GAO decided in 2015. The number of sustained cases has only reached triple digits in one other year: 106 in 2012.

Keep reading this article at: http://federalnewsradio.com/acquisition/2016/12/2016-saw-large-uptick-bid-protests-sustained-gao/

Could more transparency in the acquisition process help both government and industry? 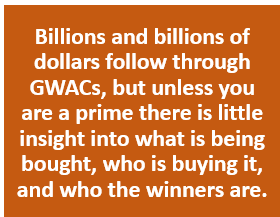 We all like it when people agree with us so I have to call attention to a recent LinkedIn posting by Jaime Gracia that rifted off of a blog I wrote last month about the lack of transparency in awarding task orders.

Gracia, CEO of Seville Government Consulting, agrees with me about the need for more transparency and raises some additional points worth calling attention to.

“There simply is too much secrecy with the amount of money flowing through all the contract vehicles across government,” Gracia wrote in his LinkedIn post. “I know many small businesses spend countless hours trying to find out information about these activities, with little success unless you have some insider knowledge.”

Keep reading this article at: https://washingtontechnology.com/blogs/editors-notebook/2016/08/gracia-linkedin-transparency-blog.aspx

The Government Accountability Office (GAO) has publicly released its recommendation sustaining the protest by ASM Research of a task order award by the Department of Veterans Affairs (VA) to Booz Allen Hamilton.

GAO determined that the VA failed to adequately consider a potential organizational conflict of interest (OCI) of the awardee based on the awardee’s performance of related task orders under the same overall program.  The ASM Research decision demonstrates that, even after the Federal Circuit’s decision in Turner Construction, GAO will sustain an OCI protest where the agency’s evaluation fails to consider key facts or is otherwise not meaningful.

The ASM Research protest concerned a task order award for Mobile Infrastructure Services (MIS) under the VA’s Transformational Twenty-One Total Technology contract program.  Through the MIS Task Order, the VA sought to procure hosting and maintenance of infrastructure, platforms, and tools for development, testing, and production of mobile applications related to healthcare.

Keep reading this article at: https://www.insidegovernmentcontracts.com/2016/02/gao-sustains-organizational-conflict-of-interest-protest-of-veterans-affairs-task-order/

Administrations within the Transportation Department did not fully comply  with revised Federal Acquisition Regulation requirements on the use of  cost-reimbursement contracts due to a lack of guidance from the DOT on how to  implement the revised regulation, an Aug. 5 DOT inspector general report says.

Keep reading this article at: http://www.fiercegovernment.com/story/dot-cost-reimbursement-awards-did-not-comply-revised-far-rules-ig-says/2013-08-08