You are here: Home / Archives for technology development

How fast? Request proposals, evaluate the options, and award a contract in 12 months or less, said Ellen Lord, defense undersecretary for acquisition, technology and logistics.

“Now that’s a first step, I would like to be on record to say,” Lord told the Senate Armed Services Committee on Dec. 8th.

There are various ways to measure how slowly the defense acquisition process moves, but whichever one you pick, Lord’s goal is ambitious. Sen. Mike Rounds, R-S.D., noted that it can take the Pentagon long enough to acquire new technology that it can be out-of-date by the time the contract is signed. Rounds pegged the process at about two and a half years. Any project with software in it — be it a cellphone or high-end military capability — is likely going to evolve into its next iteration in that time, let alone before troops get their hands on it.

Keep reading this article at: http://www.govexec.com/defense/2017/12/pentagons-ambitious-goal-launch-weapons-program-just-12-months/144408

When Americans are asked what has brought the biggest improvement to their lives in the past five decades, they name technology more than any other advancement. 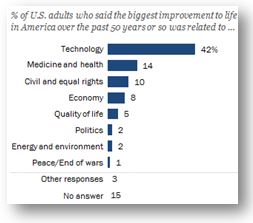 And as Americans think about the next 50 years, they expect that technology, along with medical advances, will continue to have a major impact, according to a recently-published Pew Research Center survey conducted May to June of this year.

The past 50 years have seen major changes in the U.S., from rapid social change ushered in by the civil and equal rights movements of the late 1960s, to biomedical innovations leading to increased success with human and artificial organ transplantation, to the emergence of the information age.

In an open-ended question, respondents were asked, “What would you say was the biggest improvement to life in America over the past 50 years or so?” Technology was cited most (42%), while far fewer respondents mentioned medicine and health (14%), civil and equal rights (10%) or other advancements. Technology was identified as the biggest improvement by whites (47%) and Hispanics (35%), while blacks were about as likely to name technology (26%) as they were civil and equal rights (21%).

Keep reading this article at: http://www.pewresearch.org/fact-tank/2017/10/12/four-in-ten-americans-credit-technology-with-improving-life-most-in-the-past-50-years/

Local tech firms have asked city governments in the Sacramento region to consider an alternative public contracting model that allows cities to test new technologies without first committing to purchasing them.

The model is said to benefit technology companies by providing a testing ground for products that can improve local government performance, while avoiding the lengthy approvals process for standard municipal contracts.

The proposal is modeled after a program in San Jose, but it also compares to another endeavor undertaken by the city of West Sacramento this year called Startups in Residence.

The Startups in Residence program partnered tech companies with three California cities to develop civic-enhancing apps over a 16-week period this summer. West Sacramento Mayor Christopher Cabaldon called the program a success as it helped city officials think differently about technology and resulted in a potential long-term contract with one app-maker. The platform uses mapping software to help the city locate homeless people and direct them to public services.

Keep reading this article at: http://www.bizjournals.com/sacramento/news/2016/11/11/tech-startups-lobby-for-alternative-model-of.html

Despite bipartisan efforts, the future is uncertain for the by all accounts highly successful Small Business Innovative Research (SBIR) and Small Business Technology Transfer (STTR) programs.

Authorization for the current programs expires September 30, 2017.  Reauthorization efforts are underway, but it is not clear at this time when the House and Senate will consider the pending legislation necessary to ensure no lapse in the programs.

Congress’s failure to reauthorize these programs would be an unfortunate mistake. 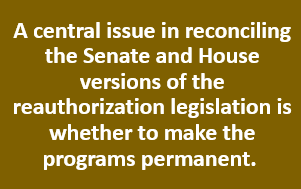 The SBIR program provides $2.5 billion a year in seed funding to companies with emerging technologies. Since program inception, more than 150,000 SBIR awards worth over $42 billion have been made. The companies receiving these funds may not yet have a prototype or the proof of concept required to receive other private sources of funding, making government support all the more important. The STTR program supports, among other things, innovative advances in health care, with the NIH providing about one-third of the annual STTR funding, which currently is approximately $220 million.

Keep reading this article at: http://www.mondaq.com/article.asp?articleid=522216

The Defense Department is asking Congress for special authority to buy products and services from “innovative” businesses that have done little or no business with the government.

If that sounds familiar, it should; the President’s 2017 budget request contains a very similar proposal. Like that earlier proposal, the Pentagon’s request generates a few reactions.

First, give the department credit for recognizing, after repeated visits to Silicon Valley, Boston and elsewhere, that it has a problem. Because of scores of unique requirements designed mostly for yesterday’s market and the generally plodding nature of the acquisition system, many commercial tech companies aren’t all that excited about working with the government. This isn’t anything new—it’s a drum many of us have been beating for years. And the department asked more than a year ago for input on non-value-added, government-unique process and compliance requirements it should do away with. Thus far, there’s been no action on dozens of recommendations that were made.

Beyond that, however, real questions arise as to whether the proposal itself makes sense—whether it is wise to create yet another set-aside under which limited or no competition would be allowed. Sure, there are innovative companies that do not do business with the government today that might find such a program at least palatable. But that alone does not make the proposal a good, idea.

Keep reading this article at: http://www.govexec.com/excellence/promising-practices/2016/04/pentagon-dodging-real-issue-innovation/127773