You are here: Home / Archives for veteran owned businesses 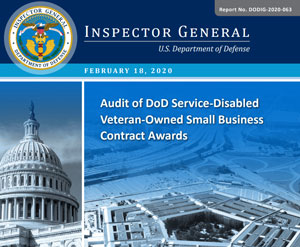 The Department of Veterans Affairs takes the position that it is not obligated to consider veteran-owned businesses on goods and services it buys through GSA’s Federal Supply Schedule, and now the VA has a court decision that backs its stance.

The ruling is a departure from several recent U.S. Government Accountability Office decisions.  The GAO has consistently ruled that the VA must comply with the Veterans Benefits, Health Care, and Information Technology Act of 2006 before conducting a GSA Schedule buy. The 2006 Act created the “Veterans First” contracting program that gives priority to SDVOSBs and VOSBs in VA acquisitions.  The VA has maintained that the GAO’s interpretation of the 2006 Act was wrong and instructed its contracting officers to not apply the “Veterans First” principles to Schedule contracting.

The Kingdomware case represents the first time a court has ruled on the question of whether the GSA Schedule program is influenced by the terms of the “Veterans First” program.

In siding with the VA’s position, the Kingdomware decision found that the 2006 Act “is at best ambiguous as to whether it mandates a preference for SDVOSBs and VOSBs for all VA procurements.”   The Federal Claims Court ruled:

The bottom line of the Kingdomware decision is that the VA did not act arbitrarily and capriciously when it used GSA Schedule contracts without first determining the appropriateness of a set-aside for SDVOSBs or VOSBs.

That brings the total to 15 protests filed with the Government Accountability Office against the T4 contract, of which 11 protests have been denied, dismissed or withdrawn.

IBM previously had filed a protest with GAO on Aug. 2.

The Aug. 2 IBM protest and the three new protests are currently listed as “open” by GAO, within decisions due by November. The GAO attorney in charge of the four cases is Paul Jordan.

A fourth company, D&S Consultants, has filed protests because the VA excludedit from the competitive range, but GAO denied the protest. GAO said that D&S could not show that the labor rates the government estimated for the contract were unreasonable. VA said that D&S labor rates were too low to give the agency any confidence that the work could be performed.

D&S has now filed suit in the Court of Federal Claims., according to Federal News Radio.

The T4 program is considered one of the largest IT contract vehicles in government, and selected companies will work on integrating VA systems and modernizing the department’s IT infrastructure.

The VA was expected to award 15 contractors the opportunity to bid for task orders valued at up to $12 billion over five years under the program.

As of July 5, 14 of the contracts had been awarded, and the 15th was being held until resolution of a protest.

Under the law, federal agencies must suspend activity on a particular contract if a protest is filed against that contract within 10 days of an award, but there are exceptions that allow work to continue.

While the VA initially suspended T4 contracting activity after IBM’s Aug. 2 protest, the VA subsequently decided it had an “urgent and compelling” need to continue with the contract instead of waiting for GAO to resolve the protests, VA spokeswoman Jo Schuda wrote in an e-mail, according to an Aug. 11 article by Federal News Radio.

Schuda also said in the article that VA has been awarding noncompetitive contracts to the T4 winners, which the agency is allowed to do.

Schuda did not respond to a request for comment.

— About the Author: Alice Lipowicz is a staff writer covering government 2.0, homeland security and other IT policies for Washington Technology.  Published Aug. 12, 2011 at http://washingtontechnology.com/articles/2011/08/12/more-protests-va-t4-contract.aspx?s=wtdaily_150811.

The VA Office of Inspector General and the Government Accountability Office have found the program so rife with deceit that one lawmaker suggested the entire program be scrapped.

“I think if the American people really paid attention…[they] would blow this whole program up and start from scratch again. It is that bad,” Rep. Phil Roe (R-Tenn.) told the House Veterans Affairs’ subcommittee on oversight and investigations.

“Hopefully it will get better, ’cause it can’t get much worse.”

“Thirty-eight percent of the reviewed businesses were not owned or controlled by a veteran and over half did not meet federal incurred cost and subcontracting thresholds. In many cases ineligible businesses passed through the majority of the contracts’ work requirements and funds to non-veteran-owned businesses,” added Finn.

“This program is highly-vulnerable to fraud and abuse,” said Gregory Kutz, director of forensic audits and investigative service at GAO, who added that while the veteran business verification program has made some progress, it “has a ways to go.”

“We recommend that the Congress consider providing VA with the additional authority and resources necessary to expand the verification program governmentwide. Only 30 percent of service disabled veteran contracts are with the Department of Veteran Affairs. Thus, for the other 70 percent we continue to have a self certification program,” suggested Kutz.